As Em mentioned last week, we too have had birthdays' galore around our parts. Husband, his brother, a niece, a nephew and Son#2.

We have been moving away from the massive birthday party and more towards having a couple of mates over for a sleepover and then maybe some sort of entertainment. This year we opted for Luna Park.

The fellas came over on the Saturday afternoon and settled in with popcorn, chips, pizzas and a Zoolander-athon. The next morning we headed out to Luna Park for opening time in order to make the most of the day.

The boys had a ball, and were all just tall enough to be able to choose to go on the more 'scary' rides if they wanted to (which mostly they didnt!). After a few hours of bumper cars and Coney Island we headed back home for cake.

Like Em, we too are no longer doing the super complicated cakes. Hooray to no more pirate ships or circus tents! As #2 has a really sweet tooth, he did still choose one that was colourful and topped with an array of lollies. Thankfully, a basic chocolate cake and chocolate icing recipe does the trick, and then its just choosing the topping.

It was a hit with them all, and topped off a really fun birthday celebration for my now 10 year old boy! 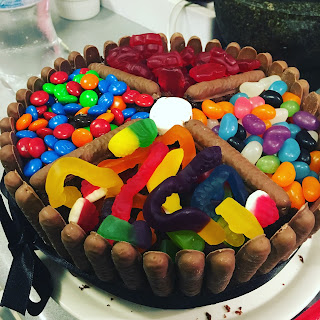