Getting our Kraut on 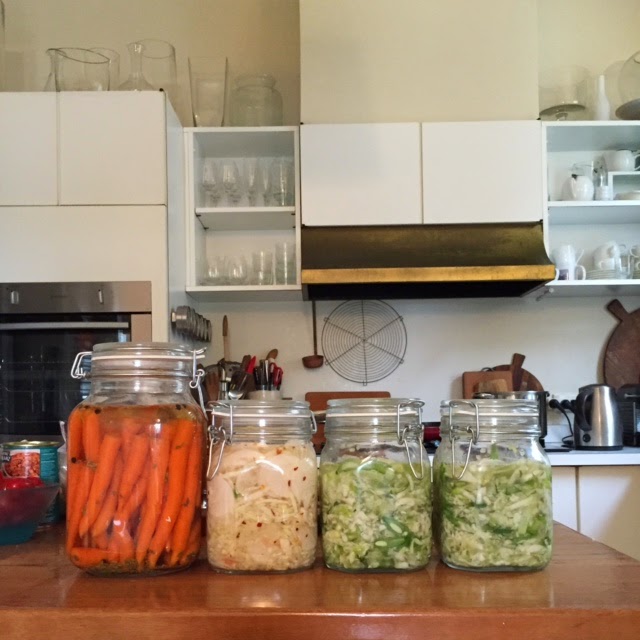 During Breakfast Love week, one of the meals featured home-made Radish Kimchi.

Wow - hands down, one of my all time favourites.

Spurred on by a blast of Sugar Quitting a year or so back, an Aunt who found the passion for Kraut plus generalised heath-based reading, our household has embraced the art of home-made fermented veg.

It is now consumed on an (almost) daily basis by Myself and H-for-Husband, and all the boys have tried it at various stages (with varying degrees of success!).

My Better-Half is responsible for the Fermented production line, and here is one of his favourite combos.


Fermented Cabbage and Tuscan Kale with Fennel and Leek.
Note:
All veg to be finely sliced/shredded
You will need 2 to 3 rubber seal, "Fido" or mason jars of around 800ml capacity

Place all ingredients in a large non-reactive container (such as a plastic Tupperware/decor container) together with salt and bruise with a pestle or wooden muddler until liquid starts to form in the bottom of container.

Fill with mixture, pressing down as you go.

Leave atleast 4cm space between the veg and the top of the jar.
DO NOT OVERFILL THE JARS as they can bubble over and leak during the fermentation process.

Top the jars up with the Brine to avoid oxidation of the veg.
(If oxidation occurs, remove the brown layer and submerge veg again.)

Allow 3 days fermentation in cool/dark place before refrigerating and eating.

Your fermented veg will keep in the fridge for up to 3 months.

Further Notes:
Where you can, it is best to use organic veg.
I am not an only-organic fanatic but just as the fermentation process helps to bring out the goodness, you also want to avoid it drawing out any nasties, so go organic where you can.

The Ferments in the pic above use veggies that we where lucky enough to come by via Hayden's Aunt who has an organic farm in Northern NSW.
In the pic are Carrots with ginger and pepper corns, Radish Kim chi and Cabbage, Fennel, Tuscan Kale & Leek.

Why Kosher or pickling salt?
Using Table or sea salt can bring a really metallic taste to your ferment.


There are a heap of tips out there on the net and this is just one method/recipe - get in there and have a go......you won't look back!