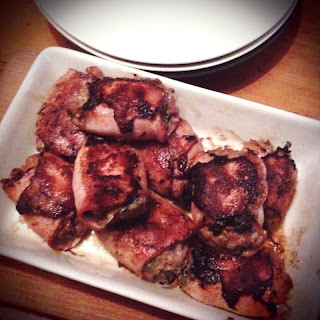 You know when you make a recipe for ages, the kids love it, eat it up every time and then somehow, you're not sure how....you just kind of.....forget about it?

Well, the Bacon Bomb is a case in point!

Bacon Bombs were in pretty high rotation a few years back - small & tasty, they were a great "no cutlery" option for the boys, they were quick and easy to prepare and cook and got devoured every time....and then we just sort of....stooped making them.

From memory, they are a twist on a recipe from a Donna Hay Kids edition, but I think she used prosciutto (which I tried the first time, as wasn't such a hit, so I switched it to bacon).

Bacon Bombs
400g mince (pork or pork & veal are good)
Bacon (depending on the size of the rasher, about 4)
1 egg
breadcrumbs & fresh herbs (for the mince mix)

Combine ingredients for make your preferred mince (I tend to do fresh herbs, a egg, some bread crumbs, a little squirt of tom sauce and sometimes some cooked, diced onion)

Form mince mix into smallish patties, a bit smaller than the size of your palm

Wrap the pattie with a strip of bacon

Tip: when you first place in the pan, put the patties down on the side where two ends of the bacon fold on each other - this will seal it and you'll then be able to turn without the bacon falling off