we have seen the light! 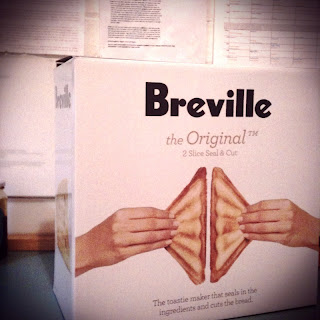 Having limited storage space in our tiny, tiny kitchen, the purchase of an appliance is something that gets some serious thought action - it's not so much a matter of cost, or ease of use (although these are obviously on the pro/con list) but where on earth will I put it when it's not being used.

Having weighed up all the issues (and eecked out a small space in the cupboard) i finally (finally!!) bought a Breville - yes, that aussie icon of home-based-fast-food (as in super speedy, not super junky) production.

We have had Jaffles for breakfast, Jaffles for lunch & afternoon tea - I have even sent them to school in the lunch boxes (a step slightly too far for one or two of the boys). We have done Ham & Cheese, we had done Baked Beans, we have done Banana & Nutella - heck, I even got adventurous one Sunday morning and tried Jaffles a'la French Toast (about a 6.5 on the success stakes).

While I admit that we are in the first blush of Jaffle-love and I fully expect the action to settle down, what I am loving (aside for the speedyness and tastyness) is that it has sparked a great response from the boys in coming up with their own combos, making their own jaffles - in other words, it has engaged them in the process of thinking about and making a "meal" - all bit it a quickie - but hey, what a great spring board into the world of "hey mum, I made this!"