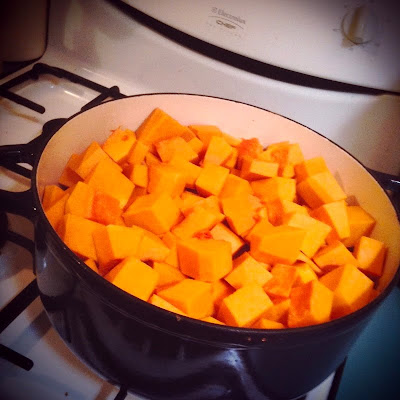 A couple of years ago, I was in the middle of studying. To ease the nightly dinner process, I introduced a once-a-week soup night.

This was a tad fool hardy on my part, as, well, I don't know what your kids are like, but mine are just not massive soup fans. It took them all a while to warm to soup. They just weren't that fussed by it. I tried just about every sort you can think of, each time to be meet with a "ummmm, yeah" (with added shoulder shrug). But in the spirit of broadening palettes, and embracing the joy of-trying-new-things (and an attempt at making life a bit easier) I hung in there with "Soup Night" - we tried mushroom soup, zucchini soup, lemoney chicken with rice soup, minestrone (several versions!)noodle soup, short soup (and long!)tomato soup, we even had a go at Pho! Just about the only soup that was met, time after time, with a positive response, was trusty old Pumpkin Soup.

We still do Soup Night.

But it really should be renamed "Pumpkin-Soup-Night".

Which brings me to todays activity. It's the school holidays. In order to get a bit of a jump on term-time soup night, I have engaged in a bit of a soup fest today. And yes, that's um, alot of pumpkin. 4kgs to be honest. But, those 4kgs of butternut pumpkin (bought for about $8) has produced not only tonights dinner, but 10 x 500ml containers on Pumpkin ready to go in the freezer - it's pretty thick really so the 500ml can be thinned out a bit and will easily feed the 3 boys for dinner. 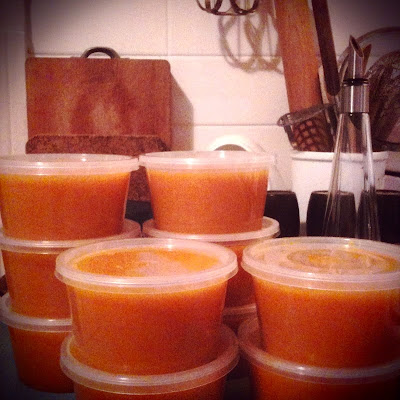